Behind the IP: Reese’s Cupfusion — Creating the World of Reese’s Central

The Place: The fictional Reese’s HQ and factory that serves as the setting for Reese’s Cupfusion’s story

Its Power Source: The fabled Crystal Cup, which collects the world’s love of peanut butter and chocolate and uses it to power the factory

The Mission: Protect the facility from the marauding League of Misfit Candy led by the power-hungry Mint the Merciless, a little tyrant who will stop at nothing to get his sticky mitts on the Crystal Cup

Worldbuilding (ON A BUDGET)

Bringing the weird and wonderful world of Reese’s Central to life for the Reese’s Cupfusion interactive dark ride presented a unique set of challenges for the creative team.

The ride’s concept meant building a whole new IP from the ground up, including the story’s setting a fantasy version of the Reese’s company headquarters. The characters and story-world envisioned as having a look reminiscent of Pixar animation style, both fanciful and tangible. The environment also had to exist across animated pre-show segments, interactive gameplay sequences, and physical sets, maintaining consistent high quality visuals. This was a tall order to achieve on a tight schedule and regional park budget. 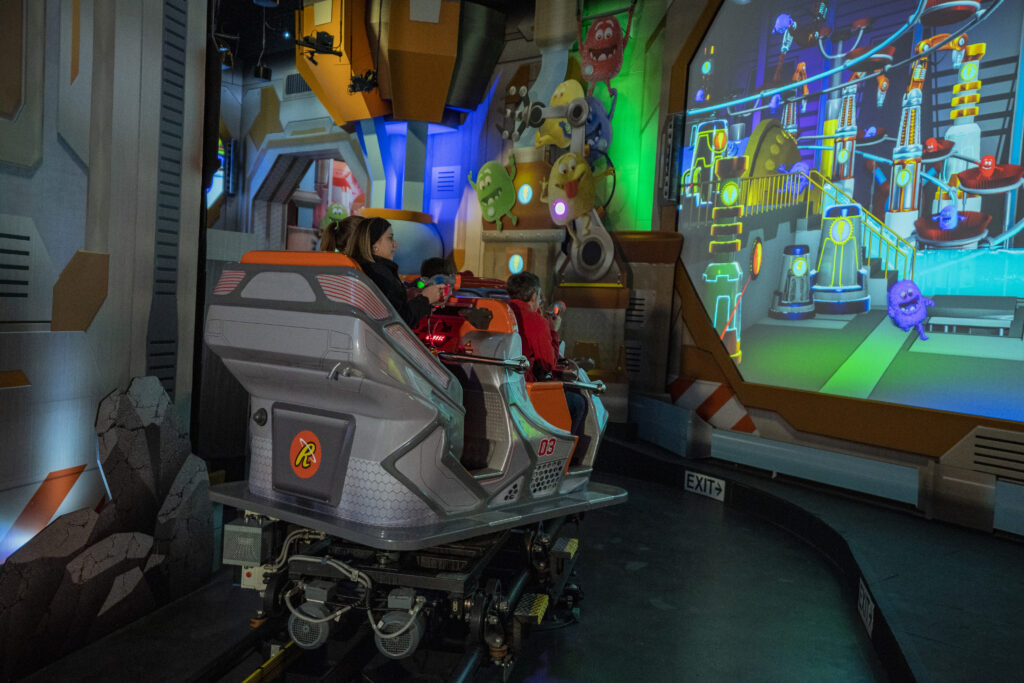 Getting the job done

The Raven Sun Creative team concluded the only way to deliver Reese’s Central on time and on budget was to the entire world in 3D. Advanced composite and rendering techniques allowed the team matching the media with 2D physical scenery that mimicked the look of 3D. This required the team to model, texture, light, render and deliver every square inch of the facility environment, including walls up to 22ft tall and 1,200ft in length, as 1:1 digital models and graphic files. The files and whole process were on a scale that no one on the team had ever experienced before.

From the Show Writer

"Once we decided we were going to set the story in a fantastical candy factory environment, we knew there were a few things we wanted to avoid. This needed to be a fresh take on the concept, something that is very different from Willy Wonka's factory which looms large in people's minds. There's also the Chocolate Tour ride nearby at Hershey's Chocolate World. Reese's Central needed to stake out new territory--while still being fun, fanciful, and larger-than-life.


"We decided to push the concept in a more tongue-in-cheek sci-fi direction. Reese's Central parodies the sleek future tech of the Marvel movies and Star Trek. At the same time, it has this kooky almost Looney Tunes vision of a factory assembly line. It's got its own unique character."
Tim Madison
Show Writer
See the full Reese's Cupfusion Case Study
PrevPrevious Post
Next PostNext