Why I Love Comedy

A Club that would have me as a member

Comedy got me into the location-based entertainment business in the first place.

Like a lot of people in this industry, rather than coming in through the front door (if there is such a thing), I sort of climbed in through a side window.

Back in late 2005, I was working as a freelance television writer. I got a call from then-vice president of Universal Creative Scott Trowbridge; a mutual friend had recommended me for a project of a hush-hush nature. Scott and I chatted for a while, getting to know one another while skirting around the undisclosed substance of the project, until he eventually popped the operative question.

“So, if you could write for any show on television right now,” he asked, “what would it be?”

Without much hesitation, I answered, “The Simpsons or The Colbert Report.”

That turned out to be the answer he was looking for (well, minus The Colbert Report part) and he invited me to join the team at UC developing what would become The Simpsons Ride.

It was one of those serendipitous moments that sometimes occur in a creative career. As luck would have it, in addition to being a huge The Simpsons devotee, I also happened to harbor something of a fannish obsession with theme park design. On the Venn diagram of nerdish interests, I fell right into the sweet spot of overlap.

That project marked the beginning of a whole new, wonderful chapter in my career–and I owed it in no small part to my love of comedy.

A Frog on the table

Comedy meant a lot to me growing up. Abbott and Costello. The Marx Brothers. Monty Python. Carol Burnett. SCTV. Steve Martin. David Letterman. They all helped shape my sensibilities–and to a weird way, my philosophy of life.

Let me just pause here to acknowledge that there are few things less funny than analyzing comedy. E.B White once observed, “Analyzing humor is like dissecting a frog. Few people are interested and the frog dies of it.” If you are interested, though, there’s a lot to be learned by cutting open the frog–so to speak.

Humor is a strange animal. It may be the neediest form of communication. Not all humor needs to be laugh-out-loud funny to be successful–although in many contexts, the results can be pretty excruciating if it’s not. A joke asks for a specific response from its audience: find me funny. This can be a tough pass-or-fail metric. Comedy is notoriously subjective.

The thing about humor is it needs a point of view to be truly resonant, and not everybody is going to relate to your point of view. This is a big part of what makes laughter so precious when you can get it. 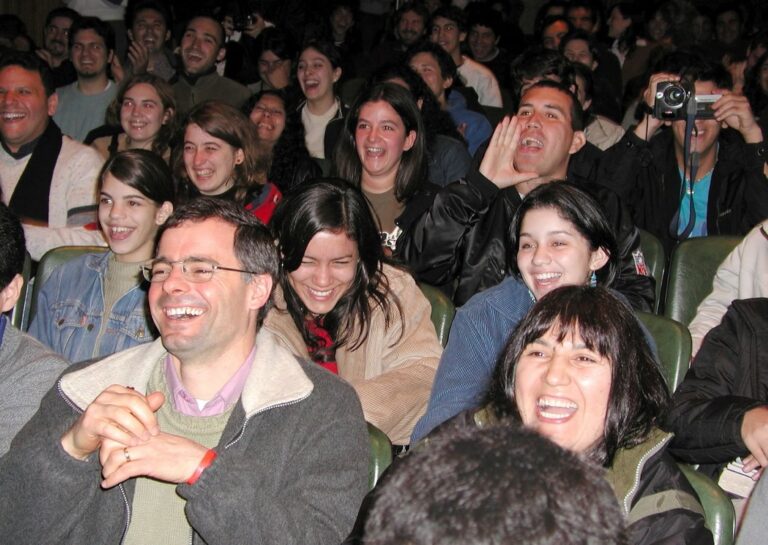 The origin of Laughter

There is an old chestnut that claims all comedy comes from darkness–from pain or anger.

That, to me, completely misses the point. Don’t get me wrong–comedy can be a response to pain and anger. Humor is a kind of Swiss army knife of communication. It can be weaponized or used as a defense mechanism. It can be turned into an instrument of satire, a way of delivering dangerous ideas and hard truths. Comedy can also be used to process hurt and outrage and transform it into something else. Boiled down to its essence, though, comedy isn’t intrinsically about anger or pain.

A baby doesn’t laugh because they’ve heard a particularly savage putdown or a funny-because-it’s-true observation about the tragic absurdity of the human condition. A baby laughs for reasons far more elemental

Now what a baby finds funny might seem pretty rudimentary–peekaboo loses a lot of its comic oomph past the toddler years–but I guarantee you that a baby laughs for more or less the same reason we all laugh, even if the specifics are different. A baby laughs because they’ve been surprised in a way that provokes a special kind of joy.

So, comedy is about surprise, a subversion of expectations. Maybe more importantly, though, it is about surprise through connection. When a joke lands, there is a positive emotional connection formed between teller and audience,  like the completion of a circuit, a moment of shared understanding. When we laugh with someone, it’s a visceral expression of empathy.

Yeah, humor may be needy, but it’s the best kind of needy. What humor seeks is a mutual reward for both teller and audience. It aims to relieve, entertain, uplift, and bond.

There is, to be corny about it, a kind of life-affirming magic in laughter. This is why I’ve never bought into the “comedy comes from darkness” notion. Humor isn’t a symptom, it’s a remedy.

For me, as a shy, socially anxious kid, humor for me was a way to reach out and bridge the distance. It was a light.

Humor is so interwoven into the fabric of our lives that we tend not to take it for granted.

Sometimes we don’t even fully appreciate the devastating impact of its absence when circumstances–like, for instance, the isolation of the pandemic–rob us of it.

We need humor. Laughter is the principal language of play, leisure, and social interaction. Little wonder then that comedy plays such an important role in location-based and experiential entertainment.

Comedy can be tricky enough to pull off even under the most ideal and controlled of conditions where you can count on the (hopefully) undivided attention of your audience, like film, television, or theater.  It can be especially tough to do well in an experiential environment where, as a storyteller, you aren’t exerting the same kind of control over focus.

Moreover, the pressure in many experiential contexts to deliver comedy with broad audience appeal sometimes results in something bland, pandering, or without any particular point of view to connect to, something that feels more like a diet comedy substitute rather than the real thing.

There’s no real formula for getting it right. There’s not even a true definition of “right”. There are too many contexts, too many variables, too many varying points of view. It’s always a case-by-case basis. (So much for analysis, right?)

Humor is not one color; it’s an entire palette–slapstick, satire, the absurd, farce, wordplay, sight gags, parody, etc., etc. It can be combined, blended, applied in bold brushstrokes or so subtly that only some will notice it.

What any person responds to is the specificity of how those colors are used. They see something they recognize presented in a way they didn’t expect. However silly, it needs to come from someplace authentic, that authentic perspective reaching out for someone who gets it.

Why do I love comedy? Because I believe it’s genuinely one of the best things in life. I swear I think that somewhere within laughter exist the deepest secrets of the universe–if only we knew how to get to them. Probably best though not to probe too deeply. Wouldn’t want to kill any more frogs.